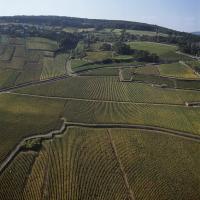 Origin of the name: The latin word “Fae”, already existed in the 14th century, has been distorted over the centuries to “Fèves” in the 18th century.

Soil: Complex soil composed of clay and limestone, that rests on a bedrock at the top of the plots, located on a mid slope, and making one of the best of the Premiers Crus appellation.